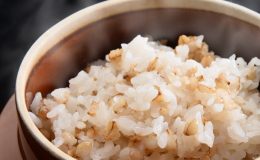 We are a manufacturer that manufactures and sells barley food products such as barley used in Japanese traditional healthy dish "barley rice", which is rich in dietary fiber. Shall you have any inquiries regarding barley, please do not hesitate to contact us.
Products
Barley Cereal 3.3
大麦相リアル3.3

It is a 100% made in Japan cereal which does not contain any additives such as sugar, preservatives and food coloring. One small bag provides approximately 3.3g of dietary fiber, which is something that tends to be deficient in one's diet.

This barley is mostly used in Japanese traditional healthy dish "barley rice". Our barley is 100% made in Japan, and it is rich in dietary fiber.

It is the healthiest and highest-level barley rice, which is rich in GABA and dietary fiber. The barley used is 100% made in Japan, characterized by its natural sweet flavor.